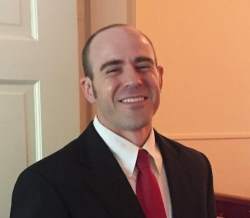 Scott Oliver was named minister at Snow Creek Christian Church beginning in August of 2019.  He will begin work on his Master of Divinity degree from Lexington Theological Seminary in September of 2019 in order to become an ordained Disciples of Christ minister.  Scott has worked the past five years at Southern Landscaped Group in Evington, VA as a certified horticulturist and landscape construction foreman.  Previously, Scott served as a high school government and history teacher in Lynchburg City, Campbell County, and Martinsville city schools.  Scott received a bachelor's degree in political science from Virginia Tech in 2006 and a master's in education also from Virginia Tech in 2007.  For the past 10 years, Scott has been a member of Timberlake Christian Church in Lynchburg, VA.  He has been married to Laurie Oliver for nine years and they have two sons: Samuel (Sam), age 3 and Andrew (Drew) who is 10 months old.  Laurie has worked as a math teacher at Nelson County Middle School for the past 12 years.